As part of an ongoing collaboration, the laboratories of Dr. Kelly M. McNagny (UBC, CBR PI) and Dr. Benjamin S. Freedman (University of Washington) have demonstrated that human kidney organoids grown in a culture dish can accurately model kidney development and disease. This work, recently published in the journal Stem Cells (pictured),A is a culmination of decades of fundamental research into the mammalian kidney and stem cell biology. Kidney organoids are multi-cellular aggregates that form structures nearly identical to human kidney nephrons with respect to size, architectural complexity, and cellular makeup. Importantly, these organoids can be generated from patient-derived cells. While there is still a lot of work to be done to optimize this system, human kidney organoid technology promises to expedite kidney research. In the short term, these methods will allow for more rapid screening of drugs. In the future, this technology may provide custom a ?replacement partsa ? for patients with failing kidneys. 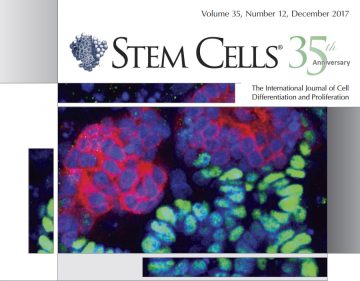 Image: A human kidney organoid grown in the Freedman Laboratory.

Human kidney organoids are derived from induced pluripotent stem cells (iPSCs). iPSCs are cells which have been genetically reprogrammed to express four key transcription factors that cause them to revert back to a pluripotent state. Once generated in the dish, iPSCs can, in theory, be directed to differentiate into all of the cellular lineages and tissues of the body.

A single human kidney is composed of millions of basic functional units, calledA nephrons, whose predominant function is to filter blood plasma to form concentrated urine. Because of the kidneya s cellular and architectural complexity, it has long been a challenging endeavor for scientists to study its cells in isolation; the biological function of kidney cells depends on continuous reciprocal interactions with other cells and the interstitial fluids of the kidney.

An especially difficult-to-study kidney cell type is theA podocyte. Podocytes are analogous in structure to octopuses: they have a large cell body, which branches out into many little a ?tentaclesa calledA foot processesA that interdigitate with those of neighboring podocytes to form a sieve-like structure through which plasma fluid passes to form urine. The reason for their notoriety is that podocytes can only be found in their native structureA in vivo. When they are explanted from the kidney into culture conditions, theyA dedifferentiate, thereby losing their characteristic cytostructure. And so, experimenting on podocytes in culture is useful to an extent, but ultimately, critical findings have to be validated in animal models.

PodocytopathiesA are a group of kidney diseases that primarily affect podocytes. For many individuals diagnosed with a podocytopathy, this very likely means a one-way-ticket to end-stage kidney disease. Part of the reason why there arena t many treatments for podocytopathies today is that of our inability to study these cells in isolation.

In fact, kidney research has largely been conducted using human subjects, rodents or other animal models. Unfortunately, it is logistically difficult to scale the number of human subjects needed to achieve population-level statistical significance in a study. Moreover, there are unavoidable species-specific differences between rodents and humans that can sometimes hinder the translation of insights from animal models to the clinic. Missing for a long time in the field was a technology that would catalyze nephrology research by being both higher throughput and species-specific.

There are no upcoming events.